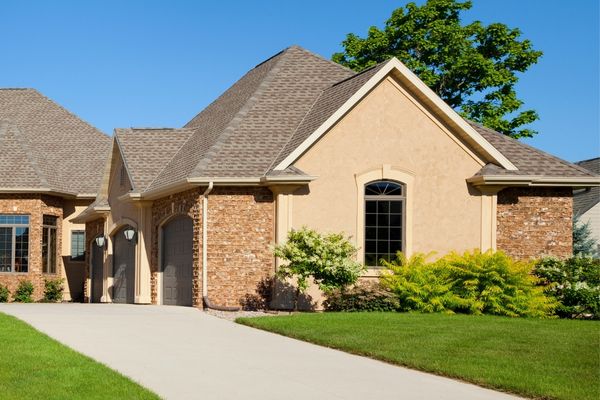 Stucco and brick go together quite well and it is not something that I thought about before throwing this post together but I found a few houses I really liked and was amazed at the design ideas I found.

This post is a collaboration of some of my favorite brick and stucco houses I found online, which will hopefully inspire others out there and give them some ideas on what elements they like.

Lighter colored stucco goes well with red brick and it happens to be one of my favorite combinations, personally.

I have two examples shown below that illustrate a light colored stucco (white) with red bricks and wanted to show the difference between the different ratios of brick versus stucco too, as that is also an important detail. 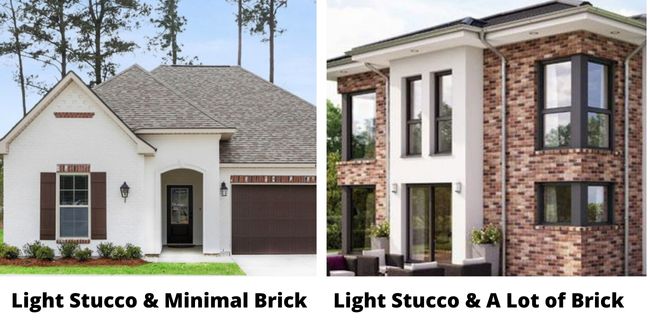 If you use a darker stucco color with red bricks, the two colors seem to mute out the brick a lot, especially earth tones like tan, which is apparent in the below images.

You essentially eliminate that "Pop" factor that happens when you use a lighter colored stucco. If your stucco color has a reddish hue to it, like the below image on the right, then it tends to blend together even more. 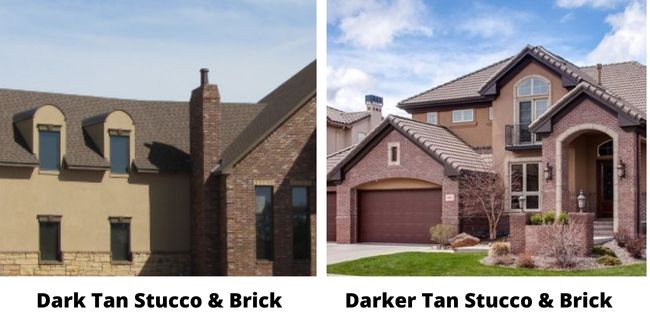 Another element I found and noticed is that if a stucco color and similar brick color are chosen, they can compliment each other quite nicely. This will, obviously, create a more blended look, but you will get different textures that a lot of people like and everything will flow much better. Grays, tans and whites seem to work best with this. 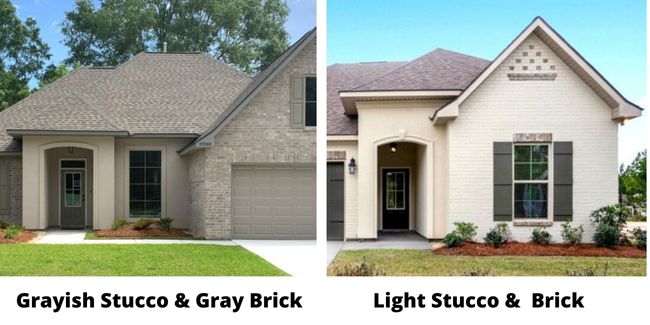 Personally, I do not think it flows as well, but some people out there may like this look and I wanted to share. 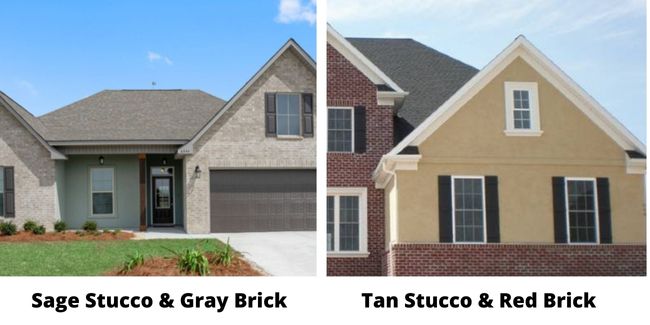 You also have the ability to match your stucco color with the color of the bricks, almost identically, and this can create either a fully blended look or can make certain bricks pop more than others. The two images below illustrate this point very well. 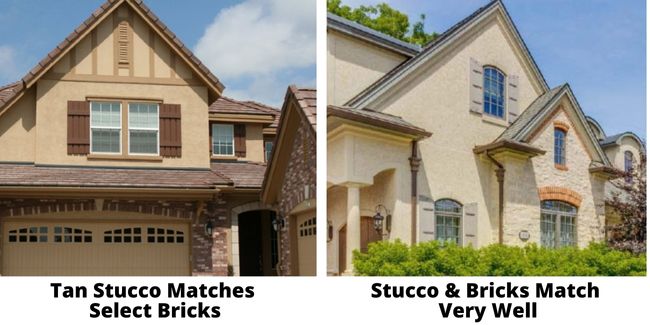 What Types Of Bricks Are Available?

The types of bricks available will vary from location to location, especially when looking at used bricks.

It is important to remember that bricks have been around a long time and they were made differently, with different proportions of ingredients, which could alter the overall look and color of the bricks themselves.

There are variations when it comes to buying new bricks too and these differences usually come down to the color of the bricks and the appearance of the surface of the bricks.

To give you an example of this, let's take the listings from Home Depot's and Lowe's websites and compare just the new bricks that they have in stock.

Home Depot: Home Depot had a few different bricks to choose from when looking at "new" bricks. These seemed to have limited colors available and the descriptions stated that they were made from clay, cement and concrete. 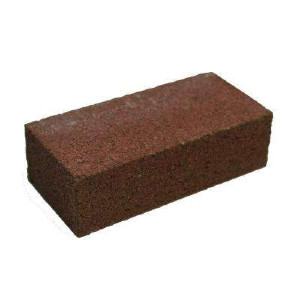 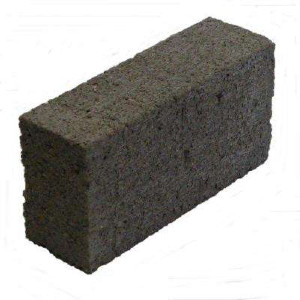 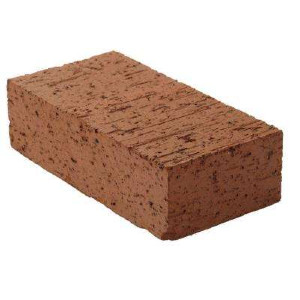 Lowes: Lowes had about the same selection as Home Depot for their new brick selection too, right at three choices. Notice the difference in the color of the bricks and the appearance. 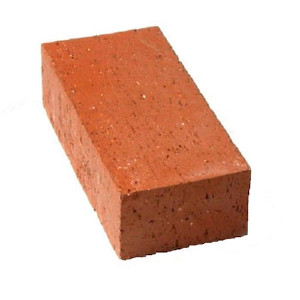 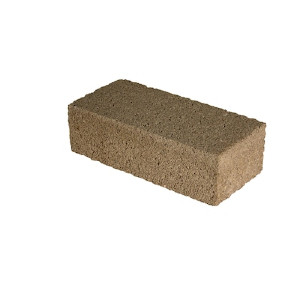 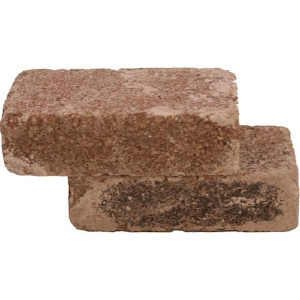 There wasn't quite as big of a selection for used bricks as there was for the new bricks at Home Depot and Lowe's, both locations having only one type of use brick to choose from each.

What is interesting though is that these two bricks were different in appearance and even color, just like we found with the new bricks. 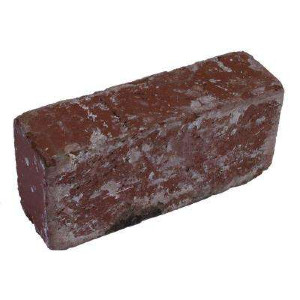 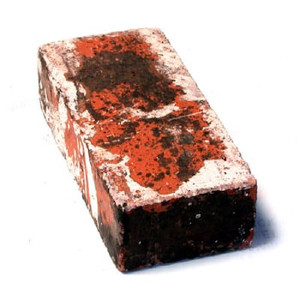 Remember, the above example of the different styles and colors of bricks are only examples from Home Depot and Lowe's, if you get bricks from somewhere else locally, then you are going to get a whole different appearance and color altogether.

What Roof Colors Go Best With These Types Of Houses?

This is actually a pretty easy topic to talk about because looking through all of the different photos I have listed on this post here and other photos online, I noticed that one roof color was actually more popular than the other roof colors and that color was a gray-colored roof.

The Three Most Common Roofing Colors People Chose: The 3 main colors that seemed to keep popping up and I personally think went well with a stucco and brick home were: black, gray and brown roof colors, whether that be asphalt shingles, metal roofing or a tile roof.

Roofing Material: By far, the most common type of roofing material used for stucco and brick homes was asphalt shingles. Now, there were some examples of tile roofs and cement tiles used, along with some metal roofing materials mixed in with asphalt to break up the look.

Remember, I am just making an observation on the photos I looked at and I'm not saying that another type of roofing material or color of roofing would not work as well as a gray, black or Brown roof color, but that was the most commonly used colors.

For the most part, there were three main stucco colors that were used for the majority of the houses I have listed above.

These colors were: white, some sort of tan/beige or a grayish color. This was the consensus for most of the houses I saw not only in my lineup but online as well and it makes sense, when you think about it.

White, tan and gray stucco colors are pretty neutral and would allow you to use a more vibrant color like a red brick as an accent and still have everything look good and mesh together. 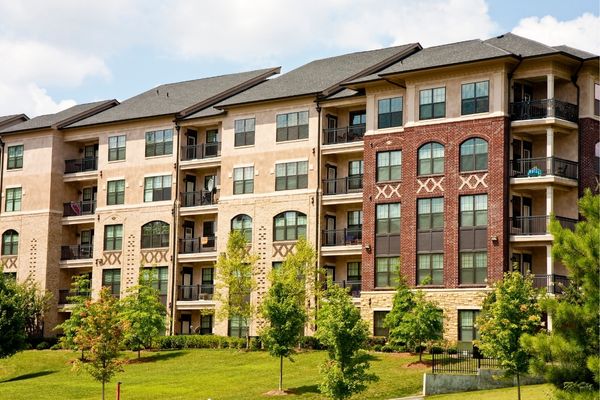 Stucco Colors And Bricks Colors: One thing I did notice when using a white stucco color, in tandem with bricks is that the color of the bricks themselves will change the overall look and feel of the building dramatically, which is to be expected but getting a more detailed breakdown of what I see will help to visualize what I am talking about...

Here is another house that is using a white stucco color but it is a softer, more warm white than we saw in the previous example.

The bricks have a brownish tone to them, making for a different look than red bricks.

The last house that we see also uses a white stucco for the walls but an entirely different color for the bricks, making it very different from the previous two houses we looked at.

The bricks used on this house are tanish in color. 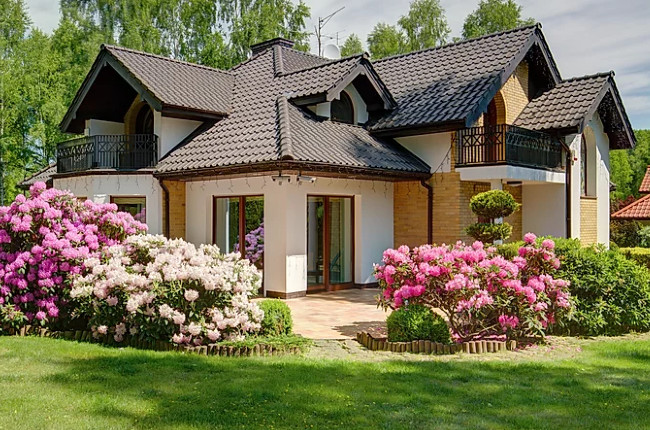 Stucco To Brick Ratio Is Important!

There were all types of different ratios of stucco to brick when I was looking around that ranged from as little as 5% or less of brick and went all the way up to 75% brick and 25% stucco.

The look you are going for will determine the amount of stucco and brick that you need to use. I would say that for the most part, the stucco was sandwiched between brick sections of the houses or there was a standalone brick wall. This seems to be the cleanest way to incorporate the two different materials together.