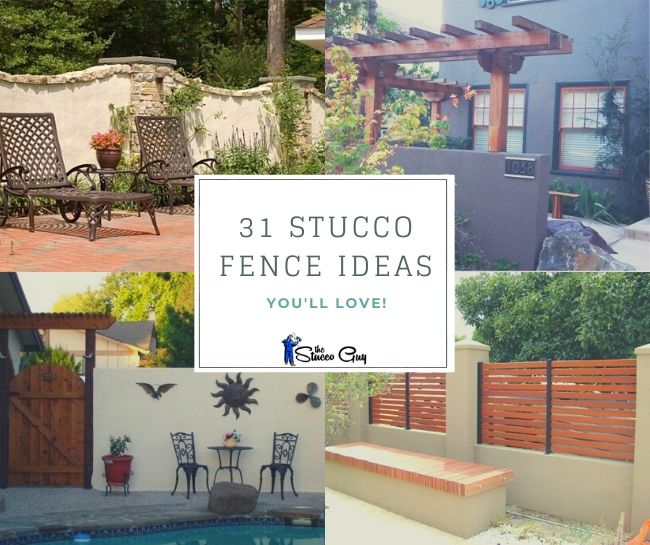 Stucco fences are a great barrier to a traditional wooden or vinyl fence and will last a lifetime if built on a proper foundation.

I wanted to compile some of the best stucco fence ideas I found from around the web to give you an idea of what they can look like, what materials they used and how it was done.

Let's check it out! 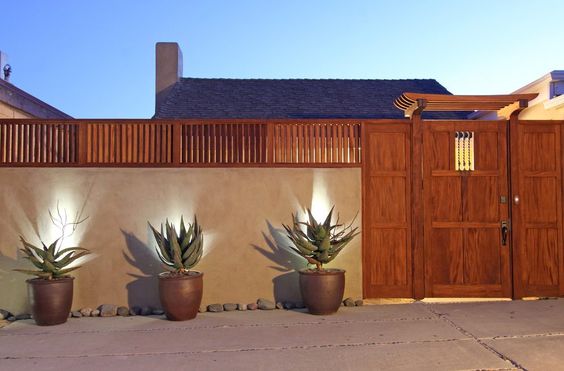 1) The stucco fence above is a smoother stucco finish that is done with a traditional type of finish and seems to use some light highlighting colors as well.

The yellowish gold color stucco really compliments the beautifully stained wood above the wall and the doors make for an unforgettable entrance. 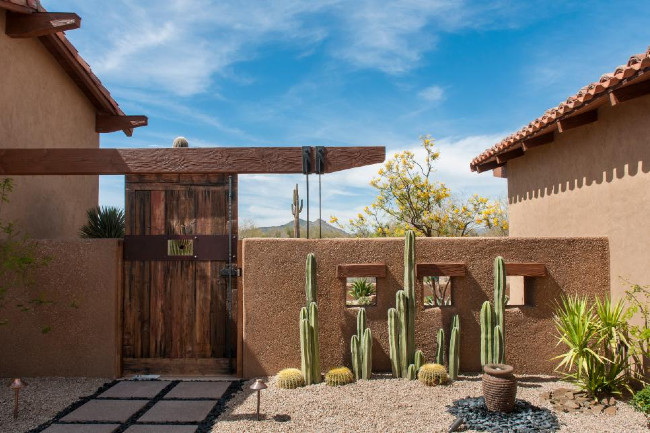 2) I really like this southwest style fence and it fits the overall design of the house well. The stucco is a heavy dash texture (sprayed on) and the three small windows add a bit of character to the overall look and feel.

The corners are rounded and look as if they were hand done, so not a perfect radius but fits well. The final touch is the wood accent pieces that bring everything together. 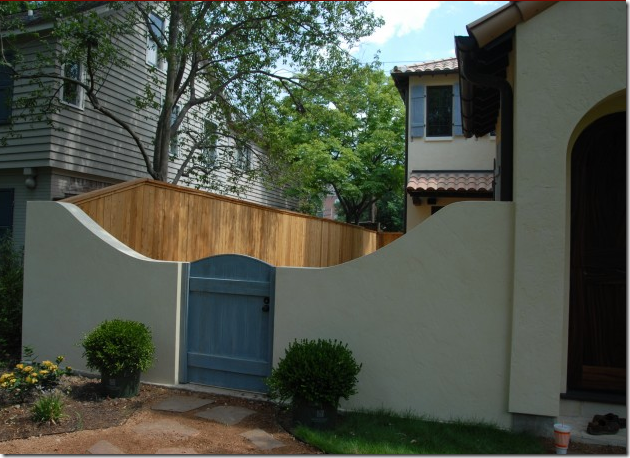 3) I like this fence idea because it is simple and pretty easy to replicate. The subtle swooping curves along the top of the wall make for a nice visual to the gate.

The texture is some type of mission texture or maybe even a heavy lace but a sand finish or smoother type of finish would also work well in this case, I think. 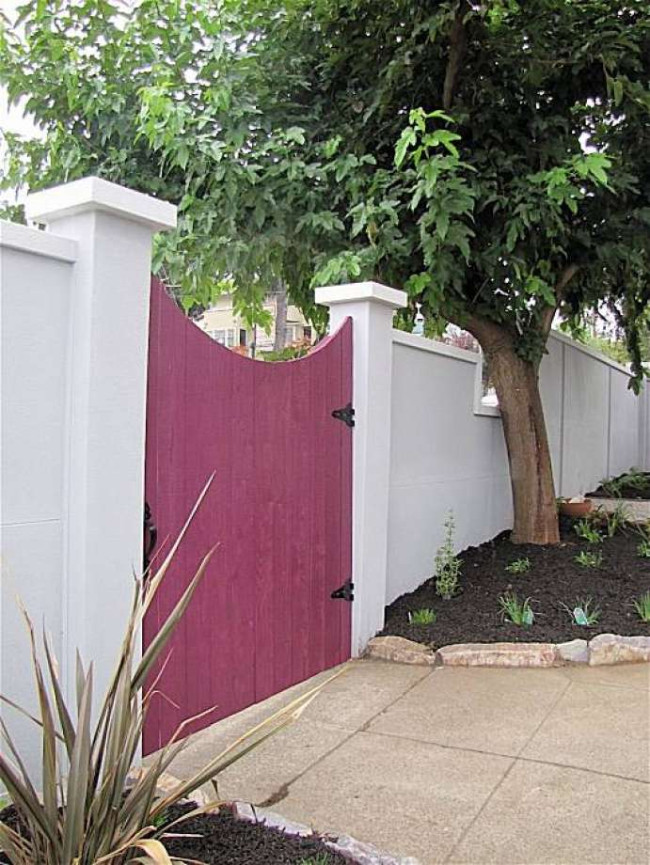 4) Here is an example of a more modern stucco wall/fence that has trim along the top of the wall that adds a little depth and outline. The stucco itself is very smooth in this example and appears to be a light grayish color with the trim being a whiteish color.

The columns add a nice touch around the gate, creating a focal point that your eyes are instantly drawn to and the length of fence between the two posts is quite far, which I like myself. 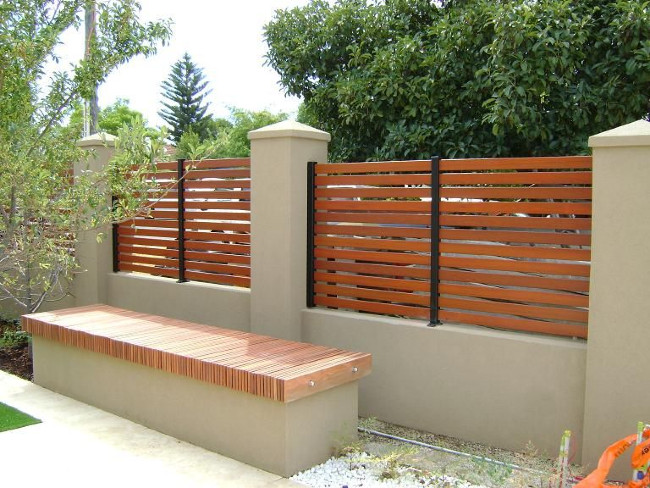 5) Here is a great example of a fence that integrates metal, stucco and wood in pleasing proportions.

It looks as if there is a medium or fine sand finish on the walls in a neutral tone which really helps to bring out the black metal and stained wood slats.

This is not a great choice if you want total privacy but it is a nice semi-private stucco fence. 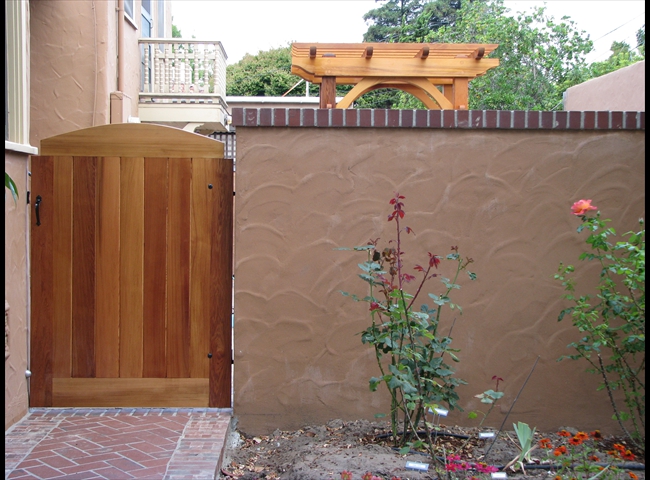 6) Here is an example of a simple stucco wall that uses a sweeping type of texture that is usually found on older homes. 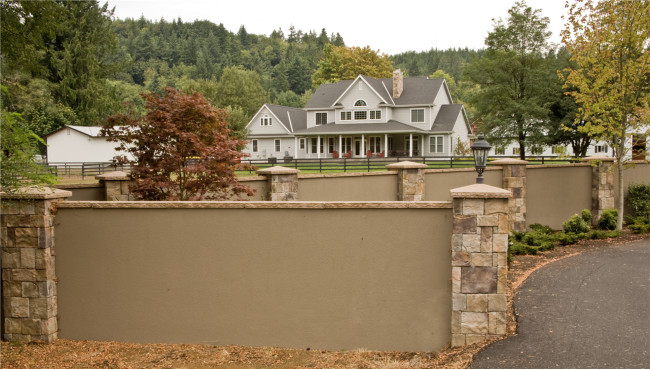 7) Here is an example of a very modern design that you have probably seen many times before, usually outside of a community of houses.

The rock pillars and stone top makes a nice transition point and looks very nice. Many colors of both rocks and stucco can be chosen to match virtually any project's style. 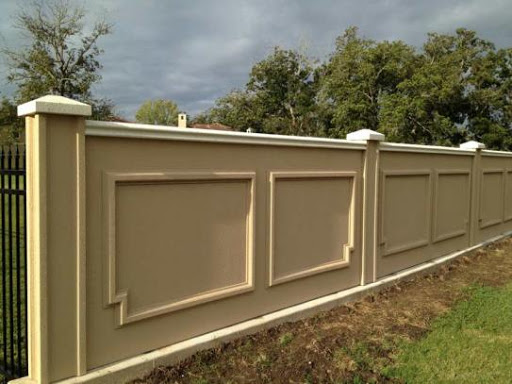 8) Above is an example of a simple stucco fence that has had foam trim pieces added to it to make it more intricate.

The columns, top of the wall and the wall itself all have decorative foam trim integrated into the design which some people find appealing. 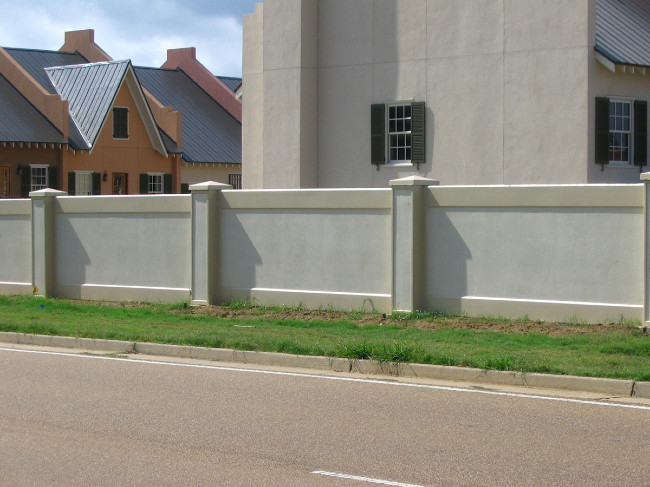 9) I like this stucco fence idea because it is simple but still is very attractive at the same time.

The design is actually a lot like the previous fence but the foam trim is shaped a little bit differently and there is none in the middle of the wall itself. 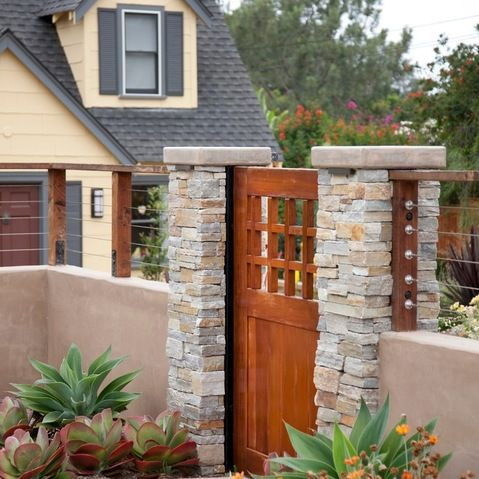 10) This image does not show a long section of the actual fence but the simple, short stucco wall with the addition of the 4x4 posts and 2x4 top boards and the wire make a nice overall design that is fairly easy to construct. 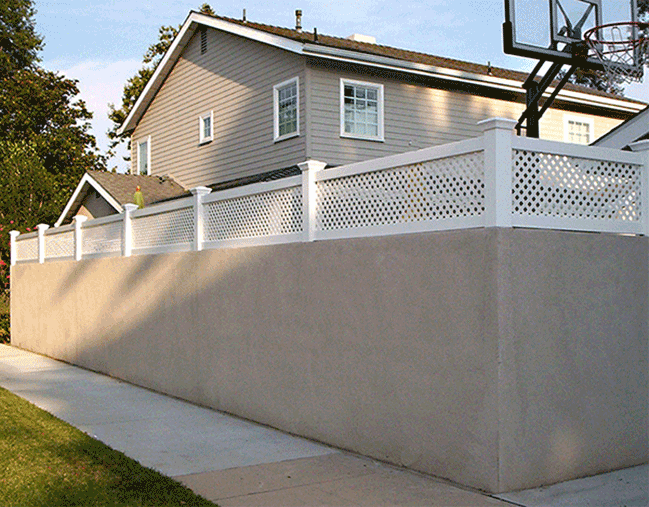 11) I am not sure if this stucco wall was too short for the people living in the house but adding the lattice on the top of the wall actually worked out pretty well and looks decent.

The wall itself has a sand finish of some sort in a neutral beige color. 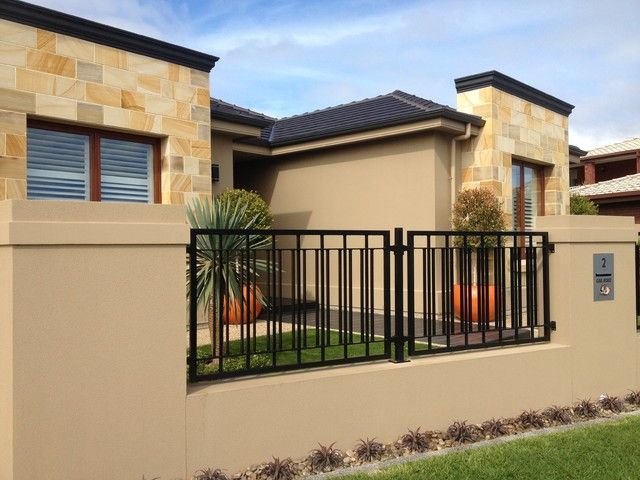 12) Here is an example of a clean and simple (more modern) type of stucco fence design that utilizes a metal fence in between the columns.

This is a pricey option and you do lose a lot of the privacy but you really can't beat the look! 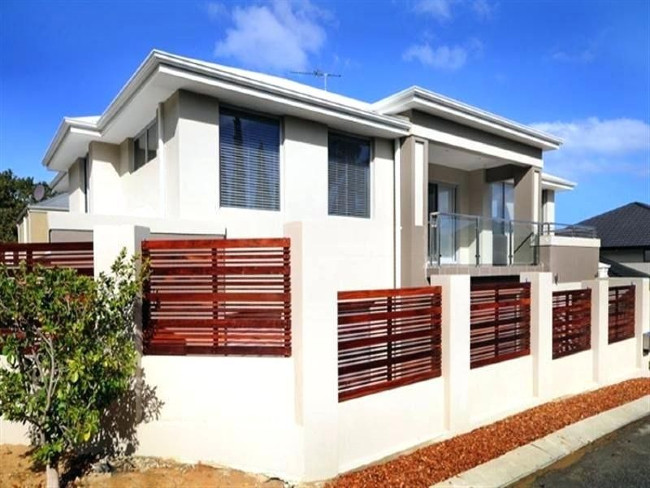 13) Here is another example of a cleaner stucco wall that uses wood instead of the metal in the last example and it even gives a little more privacy because of the horizontal layout of the wood, along with smaller gaps.

14) I really liked the adobe type of wall in the picture above. The simplicity of no trim, the stepped tops and the viewing windows in the wall are all really nice elements that tie everything together nicely. 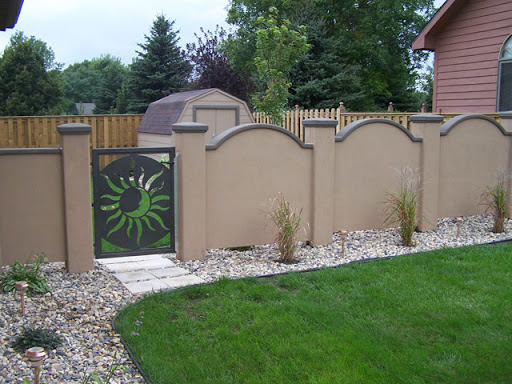 15) This is more of a fancy type of design that I could see people having in their backyards to maybe separate two areas of the yard?

It has a nice look to it and I'm sure a lot of folks would opt to have a similar type of design in their yards. 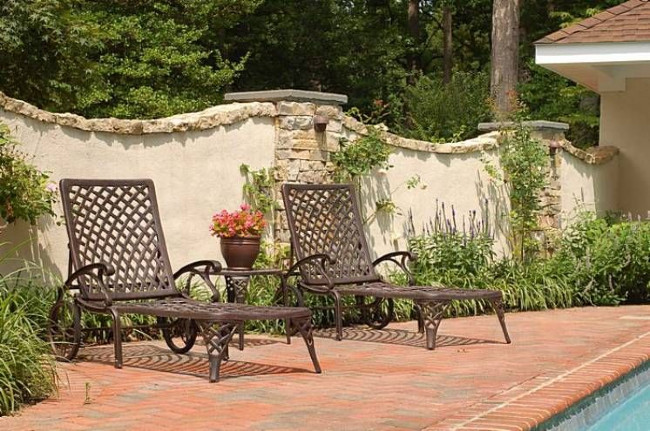 16) The above example is probably my favorite out of all of the examples I found and I think it gives off a tuscan sort of look and feel. The rock on the columns and the top of the wall make the wall really stand out. 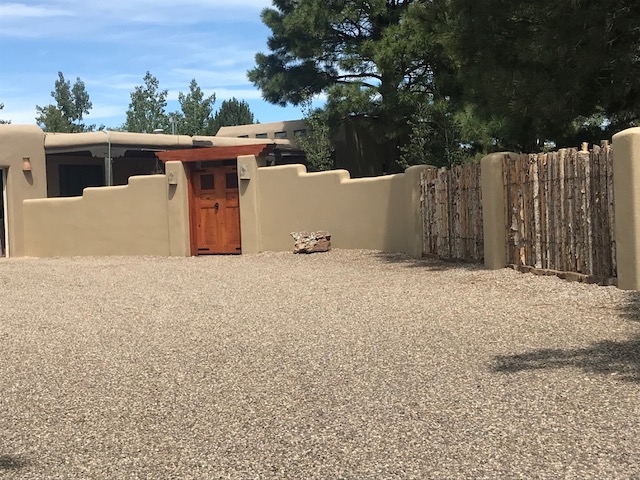 17) Here is another type of adobe wall that has that stepped top edge and very simple columns. The corners are rounded by hand which makes the curves very subtle and flows nicely. 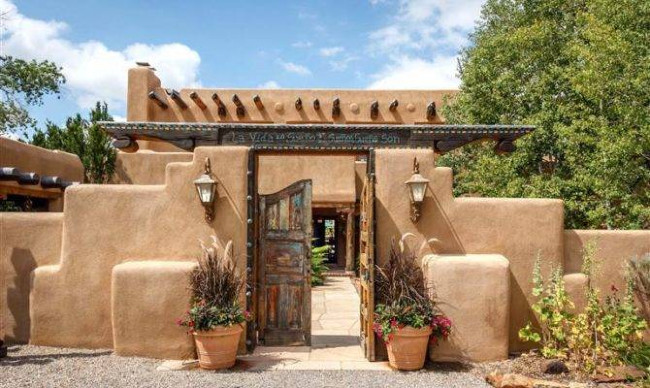 18) Here is another adobe example that I found but it doesn't show a long length of fencing, it is more focused on the entry door but you can get a sense of the walls still from the picture. 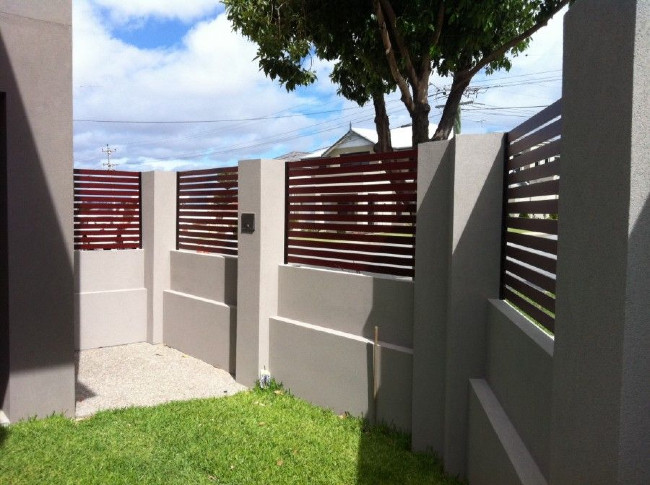 19) Here is a modern example again that utilizes the wood slats between the stucco columns, in a different style. The stucco itself is very smooth and the lower portions of the walls are stepped. 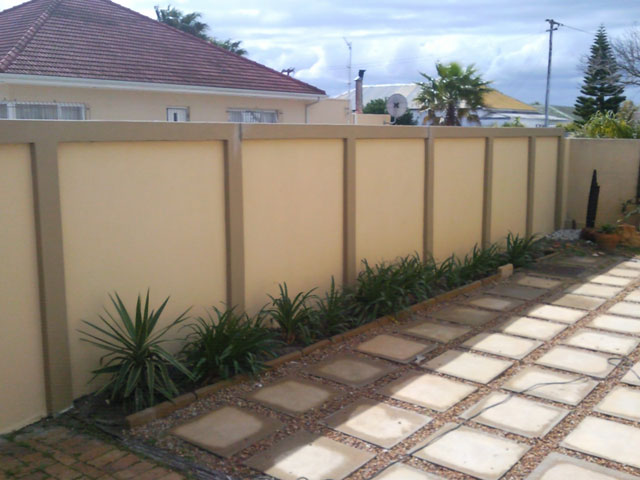 20) Here is a very simple design that could work for a lot of people, I think. I m not sure if the whole wall is continuous or if their are expansion/control joints under the foam pieces of trim. 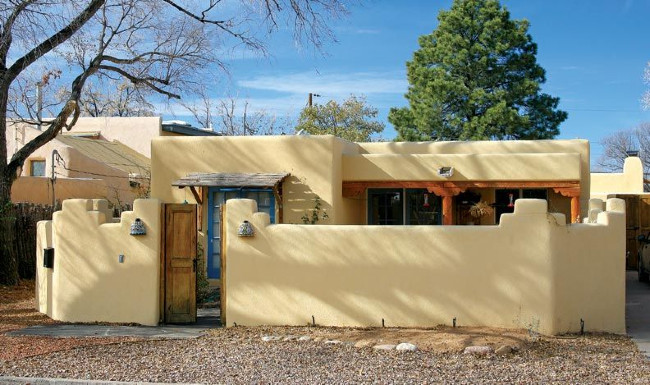 21) There were a lot of different adobe/southwestern types of examples online and I found another one!

I really like the subtle yellow color of this particular wall though and the shape and design is a little bit different than some of the other adobe designs we looked at already. 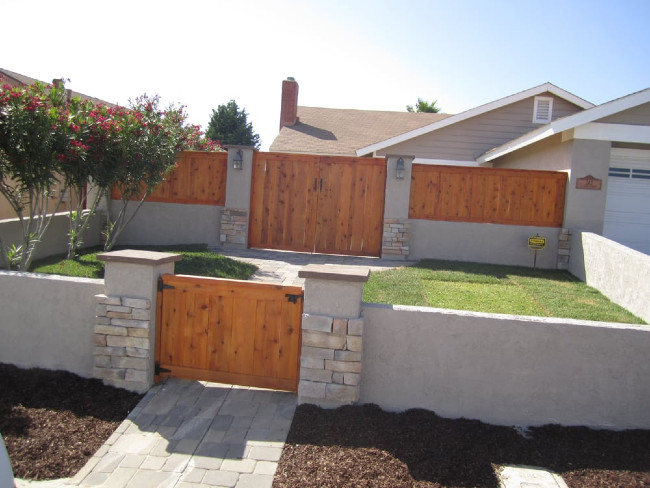 22) I thought that the above stucco fence idea was pretty creative, having two separate entry points. The smaller walls are in the front and the larger, more private walls in the rear make for a nice courtyard feel. 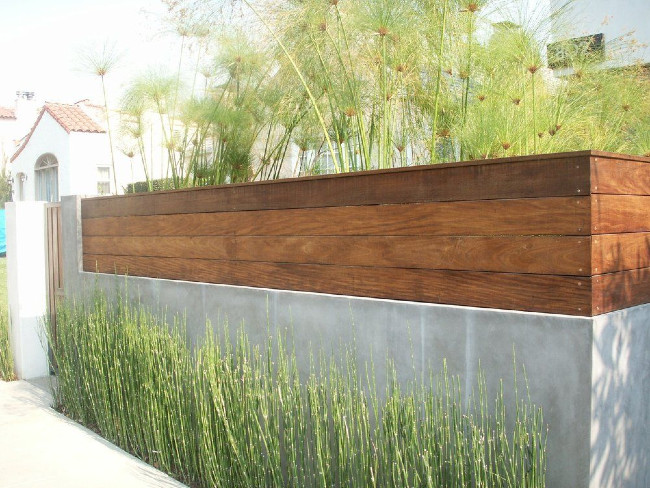 23) Here is another stucco and wood design combination but the wood is stacked on top of each other (vertically) which gives the entire fence a completely different look and feel, compared to some of the other designs.

24) Here is another example of a smaller stucco wall with horizontal wood slats used on top.

The columns are simple with a minor pop-out detail on top and the wooden slats are spaced pretty closely together, making the yard more private. 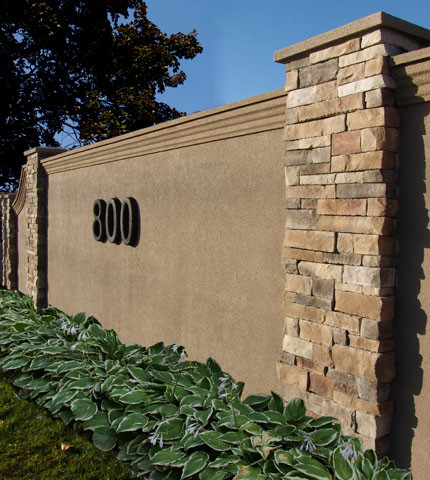 25) Here is a good example of a modern type of stucco fence that I think a lot of people are used to seeing with rock columns and a stucco wall.

The decorative foam at the top of the wall is a nice addition and makes it look much more elegant. 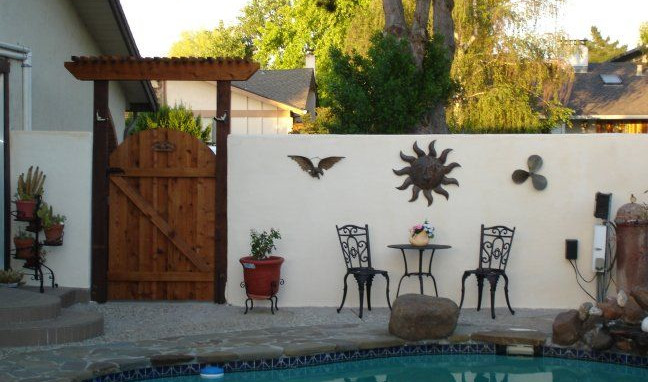 26) I am a huge fan of "simplistic" myself so I wanted to just show this plain white wall that was used as a fence for these folks' backyard.

The addition of the ornamental items hanging on the wall and the small bistro table and chairs really make it so much more! 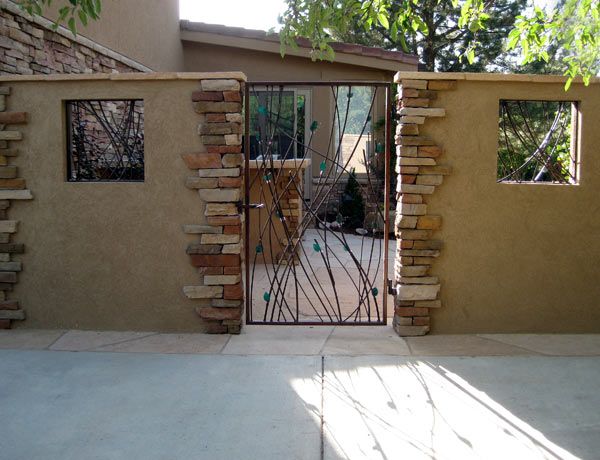 27) I like this example due to the more unique design aspect of the rock that was installed along the door frame and the decorative aspect of the windows.

It looks like a lace texture was used but I think a sand or smoother finish would have looked much better. 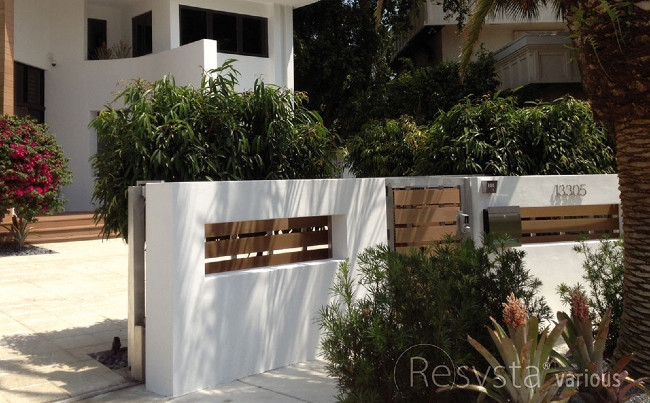 28) I really do like this modern looking fence idea (above) for it's architectural appeal. This will not give you privacy and is more of a "nice looking" fence idea instead. 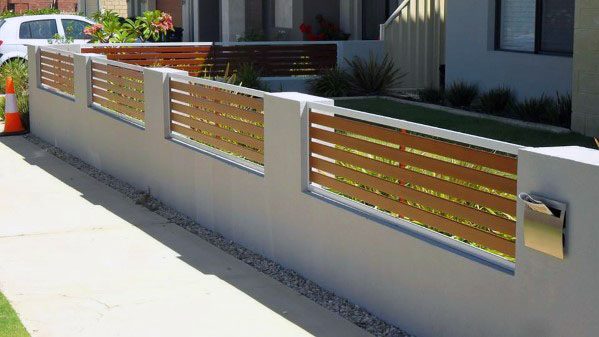 29) Here is another sleek and modern design I found online and again, it won't give you much privacy but it is very nice looking. You could always make it taller though and have a lot more privacy if you wanted! 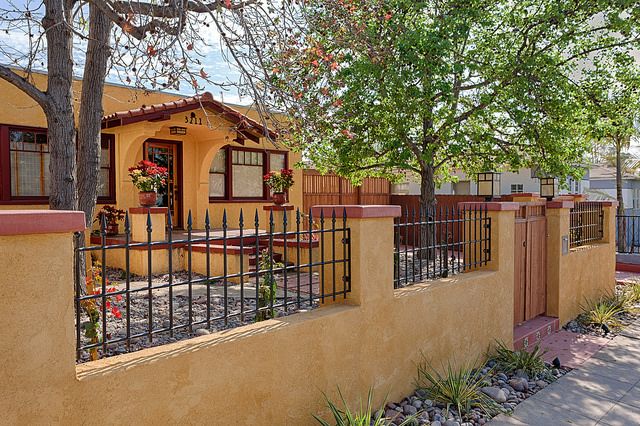 30) Personally, I do not think that this fence is nice looking but it is not because of the design, it is mainly due to the color and texture of the stucco that was used.

This was a lace texture in some sort of yellowish/gold hue and it does not do anything for me, personally.

31) This is a very nice example of how you can make a smaller privacy wall look good by adding a small pergola on top of it.

It looks like a dash texture was used and this is obviously on the front of the house, as you can see the address marker mounted on the wall.